From wine country we drove to New Zealand’s capital city, Wellington, to catch the ferry to the South Island. We also got to visit the Te Papa National Museum of New Zealand, which was quite informative.

Te Papa’s “Gallipoli: the Scale of our War” was an intense temporary exhibit telling the stories of eight ordinary New Zealanders involved in the World War I Gallipoli Campaign, each of them represented by very large and extremely lifelike sculptures created by the Weta Workshop, the same special effects and prop company that worked on the Lord of the Rings movies. More than 2,700 Kiwis lost their lives in this violent campaign, and the museum honors their contributions and legacy. We were too engrossed in the exhibit to take photos, but we highly recommend reading about it here and of course visiting the museum if possible.

Although the entire museum was full of interesting Maori and Kiwi history, we especially enjoyed the “Passports” exhibit, which told the story of immigrants from England, Scotland, India, Somalia and many other countries who came to New Zealand for a better life. The early immigrants had to endure a months-long journey by sea, which the museum highlights with interactive and audiovisual components. It made us even more grateful for our easy 18-hour flight. 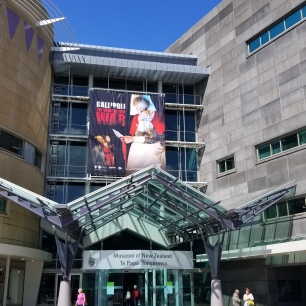 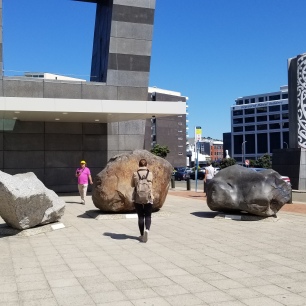 Checking out the lava stones that were more than 75 MILLION years old!

We Got a Taste of Kiwi Hospitality

After the museum, we met with Steve, a Wellington pilot with whom John had been communicating. Steve and his lovely wife, Maria, joined us for dinner at Monsoon Poon, an incredible restaurant near the waterfront with a diverse, Asian-inspired menu and indie vibe. We enjoyed talking with Steve and Maria about the maritime industry in Wellington and learning about New Zealand life from two kiwis. They were so hospitable and even dropped us off at our Airbnb after dinner. We hope they decide to visit New Orleans so we can return the hospitality, and fulfill Maria’s wish of seeing the cypress- and moss-filled Louisiana swamps!

Thank you, Steve and Maria, for the hospitality! We hope to return the favor in New Orleans.

Next we’re off to catch the ferry to the South Island.