Guest Blogger signing in from down under! For those of you that don’t know me, I’m Robin – a childhood friend of Lindsay’s and fellow travel enthusiast! When I heard Lindsay and John were headed to Australia­­ I knew I had to jump on board, at least for a little bit. I still regret not meeting Lindsay in 2008 when she spent a semester abroad in Paris. So here I am, on continent number 6 for me, ready to tell you all about our time in Sydney.

We arrived Saturday morning, got our rental car and took off to explore the city. John and Lindsay were already accustomed to the opposite side of the road thing, but I was not and almost got hit by a car while trying to walk across the street. I’m getting better at looking both ways, I promise!

Once we got settled in the city, we took the drive to Bondi Beach where we checked in to our cute Air B&B, which Lindsay and John said was the best one of the trip so far. No complaints from this girl, with views on Bondi Beach on one side of the apartment and Coogee beach on the other. 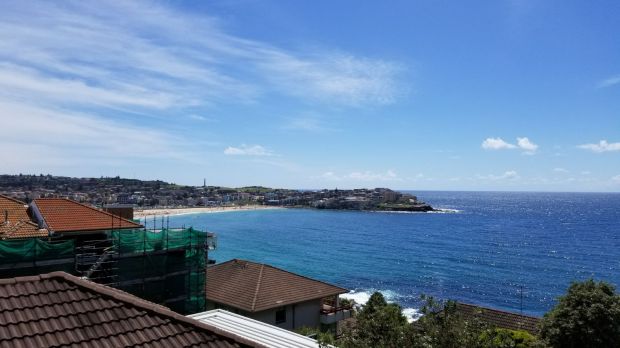 View from our room.

John and I decided to take the 5-minute walk down to Bondi Beach and check out the art wall. It reminded me a lot of the street art in Berlin with some really cool pieces, here are a few … 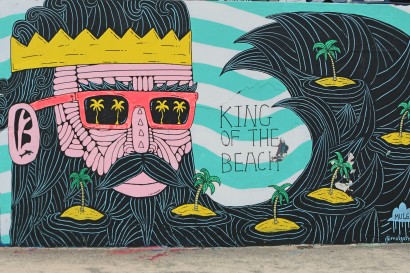 We went to a bar called The Iceberg, which has a massive pool overlooking the ocean. There was a wedding happening there and a private event. 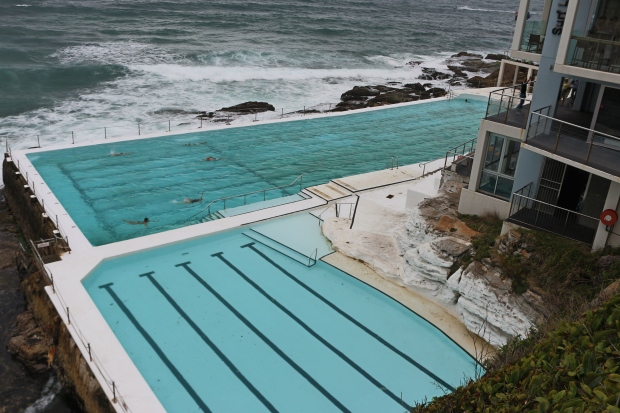 For dinner, I wanted to eat at a sushi train restaurant because I had never been to one before. We found one located in a great neighborhood called Paddington, which happens to be where one of John’s childhood friends, Heather, now lives. We meet Heather and her husband at their adorable apartment, then ate all the sushi! It was delicious, but jet lag started to kick in and I almost fell asleep at the dinner table! 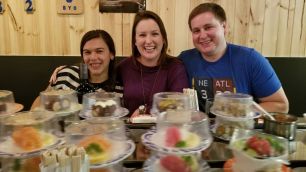 The next day, John got the opportunity to ride a Royal Caribbean cruise ship with the Sydney pilots (thanks, Capt. Michael). This meant that Lindsay and I were on our own to navigate the city. We got our Opal cards and rode the bus down to Sydney Harbor. On Sundays, it only costs $2.50 to ride buses, ferries and trains all day, no matter how many times you ride. Needless to say it was pretty crowded but the weather was perfect!

We started at the botanical gardens, a massive park right in the middle of downtown. They had a pollination exhibit, with a vertical wall made completely out of flowers that was gorgeous and smelled great.

Then we got our first glimpse of the Sydney Opera House and the Harbor Bridge. It was incredible to see them both in person after seeing them in pictures and movies for years. We ate lunch outside at the Opera Bar, while listening to live music.

Afterwards, we went to a neighborhood called the Rocks, which John’s Aunt T said was her favorite when she lived here in the 1970s. The weekend arts market was going on, so Lindsay and I did some shopping and I picked out my Christmas ornament.

Next, we took a ferry to Luna Park, an old-time amusement park full of rides. We didn’t ride any, but it was interesting to see until it started pouring down raining.  While we waited for the weather to clear, we ate some delicious oysters and drank some champagne.

When the rain stopped, we took the ferry back to the harbor to meet John and his new friend Michael for dinner. It was great that our first two nights out included hanging out with locals an friends old and new. Michael was such a friendly guy, and told us all about life in Sydney, but he did crush my dreams of ever living here by telling us the housing market is ridiculously expensive – the average house costs about 1.4 million! Afterwards he took us to a rooftop bar that Lindsay and I had spotted earlier in the day, with a great view of the Opera House. We enjoyed our drinks and then took the bus home after our 20,000-step day!

Monday we went to the Tauranga Zoo so I could have a sighting of the kangaroos and koalas – it was a massive zoo with lots of exhibits. 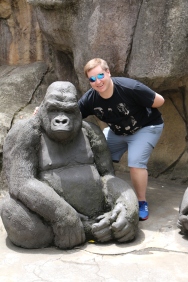 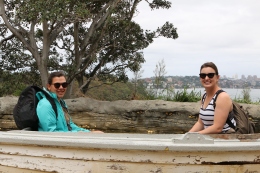 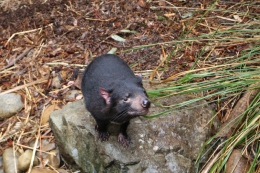 After the zoo, we came home to regroup for the evening and, while relaxing on our balcony, a few rainbow lorikeets came on our ledge. They were beautiful!

We then took our tour of the Sydney Opera House with our very animated tour guide. He did a great job of explaining the history of the building, and how some things can never be changed in it because they want to keep the integrity of the architecture.  My favorite part were the stunning fuchsia chairs in the largest concert hall. 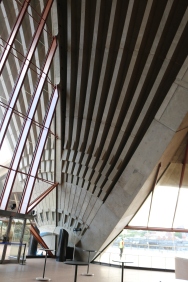 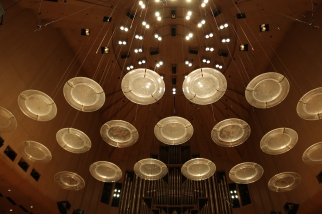 Tuesday we ferried from Watson’s bay to Manly Beach to explore the beautiful beach. The water was too cold for a swim, but it was still nice to look at. The harbor had lots of shops and places to eat. 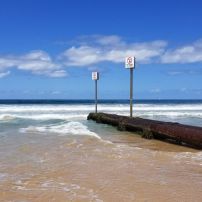 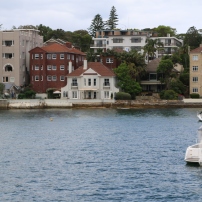 Afterwards, we went to observation bar called Blu on top Shangri-La Hotel for a sunset view of the harbor! We had a great photo shoot and enjoyed the view.

Later that evening John picked an Indian restaurant right next to the soccer stadium for our last meal in Sydney. Our Uber driver dropped us off right in front of the stadium, where the Adelaide A-League was playing the Sydney Football Club. On a whim, we decided to see if we could go in. Because it was after half-time, they let us in for FREE! The game ended up going in to a very exciting overtime. The stadium was incredible and John was in his happy place. I cheered for the home team because I liked their baby blue uniforms and their fan base was exciting to watch. John and Lindsay pulled for Adelaide because they had just gotten back from there and really enjoyed it. I made the right choice – Sydney won!

We loved our time in this iconic city, and we packed a lot into our four days there. For those considering a trip, we’d recommend choosing accommodations close to a ferry stop, to avoid having to navigate the congested street traffic by car. Now we are off in our business class seats to Auckland to explore a new country!