From the beaches of southern Thailand we headed north to experience Chiang Mai. Founded in 1296, Chiang Mai is the largest and most culturally significant city in Northern Thailand and was featured on Trip Advisor’s “25 Best Destinations in the World” list two years ago. It certainly lived up to its reputation!

We flew Air Asia from Krabi to Chiang Mai International. John booked our accommodations at Golden Bell Hotel, which was palatial compared to our teensy bungalow in Koh Lanta.

Inside courtyard of the Golden Bell 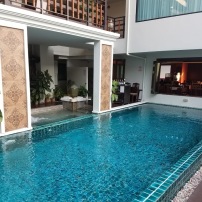 That’s our room up top!

Our first night we had a fantastic dinner at The House Restaurant and explored the night market, where we snagged a few more trinkets.

This part of the market had a bunch of delicious looking food stalls. Too bad we’re scarred for life from Koh Lanta! 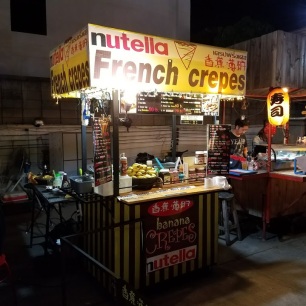 Of course we had to get one

The next morning we were in search of caffeine and discovered Mountain Coffee, which quickly became our favorite spot. We even made friends with the barista, Jing, who gave us recommendations on where to go. Thai iced coffee is delicious! Jing was amazed by John’s affinity for straight espresso. 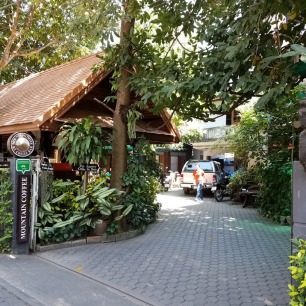 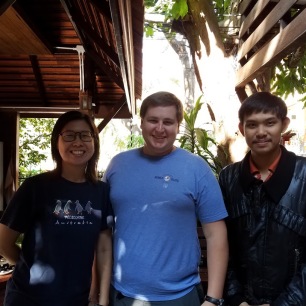 John posing with our friends (Jing on the left)

Our first stop in Chiang Mai was the Lanna Folklore Museum. We decided to do this first so we could get a quick culture and history download before seeing the sights. It was a very interesting and well laid out museum with engaging content and visuals. 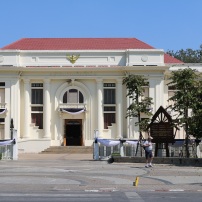 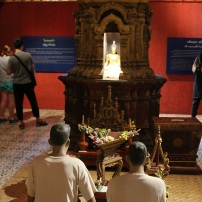 We learned about how and why locals give alms at local temples and shrines. 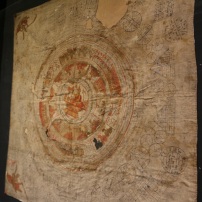 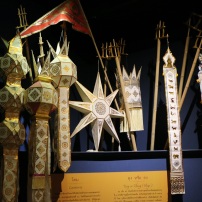 Tung, or flags, have been Buddhist offerings since the mid-13th Century. We saw these all over the city.

My favorite part of the exhibit – how Lanna people picked a partner. They’d basically have a supervised front porch jam session, then get permission to touch hands. 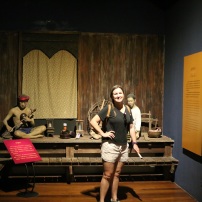 Posing with my new friends, in the middle of the “aew sao” process. Aren’t they CUTE!

The definite highlight of this stop – and the day we’d been looking forward to for months – was our trip to Patara Elephant Farm to be elephant caretakers for a day. The driver picked us up bright and early and brought us to the reserve, where we were greeted by a group of elephants eating breakfast. There was even a pregnant elephant – did you know they are pregnant for 22 months?? We got to feed and bathe the elephants, learn the commands and work alongside the mahouts for the day. John was paired up with a 23-year-old mother of two named Buhn Ton. They really bonded. I, however, got a moody teenager that did not like following directions. It was quite a once in a lifetime experience! Several of our fellow attendees were on their second visit – we hope to visit again one day too. 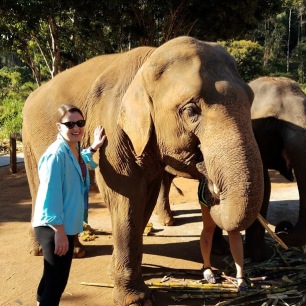 You have to pat their trunks or shoulders to let them know you’re there, since they have little to no peripheral vision.

You tell the elephants they are doing a good job by saying “deedee” (which is what the mahouts say). 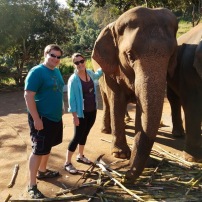 This momma was 21 months pregnant – about to give birth any minute! I actually felt the baby elephant kick!! 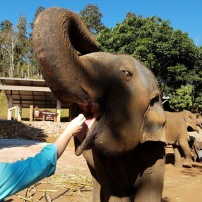 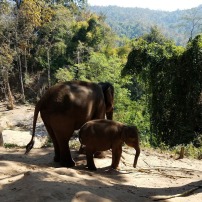 Can’t a girl eat in peace?

Buhn Ton had the prettiest eyes. She was so sweet.

Then the elephants took us for a walk…

We had a great time!

We also visited Wat Phra That Doi Suthep temple (often called just “Doi Suthep”) on the outskirts of the city, said to be built in 1383. It has the best overlook and is considered sacred. To get there, however, you have to take a very unsacred “red bus,” which holds 10 people comfortably and up to 15 sardine-style. Of course the drivers wanted to wait until as many people as possible are in line before stuffing us all in the back, maximizing their earnings on the trip up the mountain. Luckily, I was able to snag the front seat on the way up, but wasn’t as lucky on the way back (more on that later).

Not particularly enthused about the red bus sitch – thank goodness I snagged the front seat!

The man loves an overlook.

Taking it all in…

Legend has it a holy white elephant picked out the location for Doi Suthep.

Of course someone rang the bell while we were there. 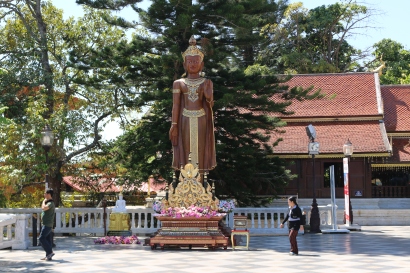 One of many incredible shrines. 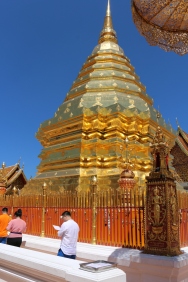 Copper-plated chedi – the most sacred part of the temple. We had to take our shoes off and I put a scarf around my shoulders to show respect.

Love this multi headed dragon! Should we get one for the house?

On the way back down, I’d strategically asked a driver for the front seat before the crowd began gathering. At the last second I was bumped to the back because a monk was riding with us. What’s up with that? Turns out Thailand monks are forbidden to touch women and aren’t even allowed to be in the same room as a woman, much less be squeezed into the back of a red bus with several of us. (Even more interesting, when a woman wants to give offerings to a monk, the monk isn’t allowed to accept it directly. He actually has to lay a piece of cloth – which he carries around for this purpose – on the ground for the woman to place the offering on. Can you tell I fell into a wiki walk on this? I digress…)

On a non-monk related note, we finally found a place where our pale skin is appreciated! In fact, we learned most women here will pay top dollar to have a lighter complexion – all of the facial cleansers are marketed as “whitening” or “brightening” – AND I was even told several times that my skin is beautiful. What a different world! 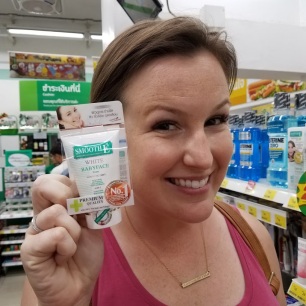 Not only do we plan to return to Chiang Mai, we’ve actually recommended to several people traveling on the fly that it’s a must-see for any Southeast Asia trip. We loved it and will be happy to give even more recommendations to anyone in need. Special shout out to B & M for giving us some of their favorite places as well!

Since we were in Chiang Mai during part of Mardi Gras, it’s fitting that we heard Kermit Ruffins’ “Drop Me Off in New Orleans” playing at a restaurant where we were eating dinner. It was the perfect touch of home and reminded us of our friends and family who we miss very much!