This was the last excursion trip via the 2015-16 companion pass. I’ve always heard that Belize is a nice place to visit, so we decided to go the week following the presidential election (in hindsight that was an excellent decision). We flew Southwest via Houston to Belize City. Houston Hobby Airport recently expanded with an international terminal, which was primarily funded by Southwest Airlines. There is only one flight to Belize with Southwest, and I was grateful it was not via Atlanta.

Once we landed in Belize City, we had to take a small propeller plane to San Pedro on Ambergris Caye. The flight was only 15 minutes and took off just before sunset. We arrived and took the 5 minute golf cart hotel shuttle to Ramon’s resort. I somehow managed to book the honeymoon suite because it wasn’t much more per night than the regular room rate. Our stay was 5 nights, including the 4th night free via the Citi Prestige credit card. Our first night we ate a relaxing dinner at the resort and capped off the night with a bottle of wine.

Regarding the wine, I experimented with bringing our own bottles of wine (after repeated issues in Puerto Rico), because sadly there is no Costco in Belize. The only advice I have for bringing your own wine is to make sure that it will be somewhat temperature stabilized (not flying in the middle of the day in the summer), and that you put the wine in a sealable plastic bag for transport. Having a bottle break in your checked bag is a very unpleasant surprise on arrival, and I speak from experience unfortunately.

Not thrilled about the hopper flight 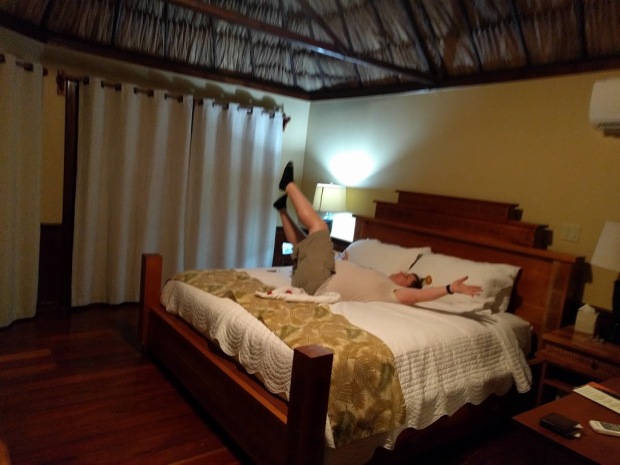 Excited to finally be in the room!

Our first day was very relaxing. We hung around the resort, got massages and walked down the beach to see the neighboring area. A good sushi dinner was a short 3-4 minute walk down the beach, and the restaurant had an iconic neon light sign. 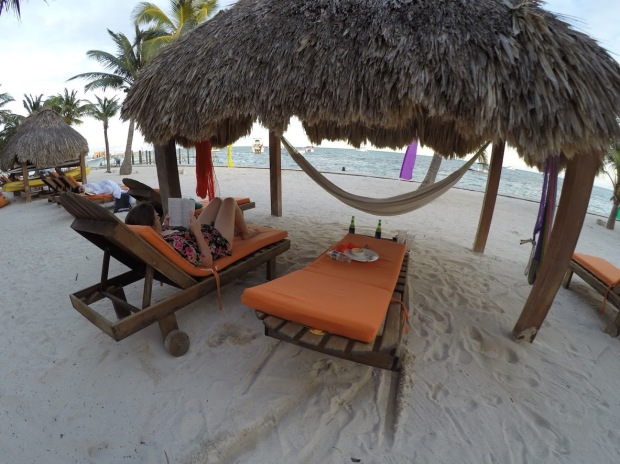 I actually attended my first yoga class in my life. Lindsay and I did a 9 am yoga class that was tucked away in a corner of the resort, but thankfully mostly in the shade. It was still pretty hot.  Later that afternoon we went on our first dive together since Lindsay was scuba certified in July. 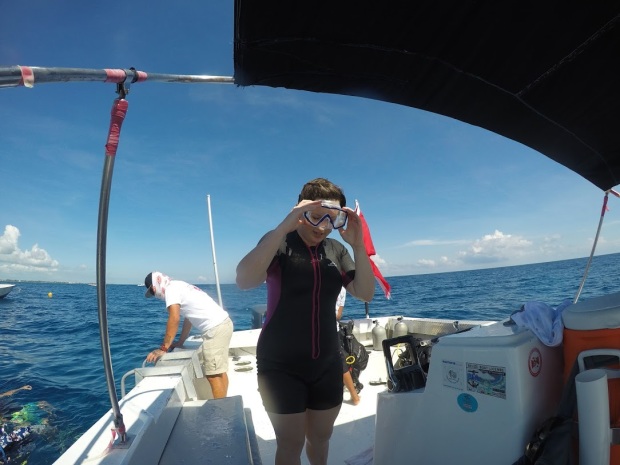 That night, we ventured off the resort again for dinner and it was amazing.  One of the waiters at the resort recommended El Fogon. I learned that curry is a key ingredient in several local specialty dishes. We were actually lucky to have dinner there, since we arrived around 9:30 p.m. and they looked as though they were closing down for the night. The bottom right picture was Lindsay’s reaction to them being able to seat us for dinner. 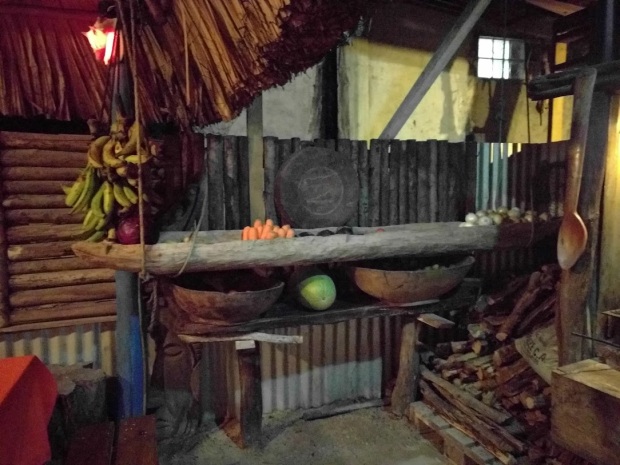 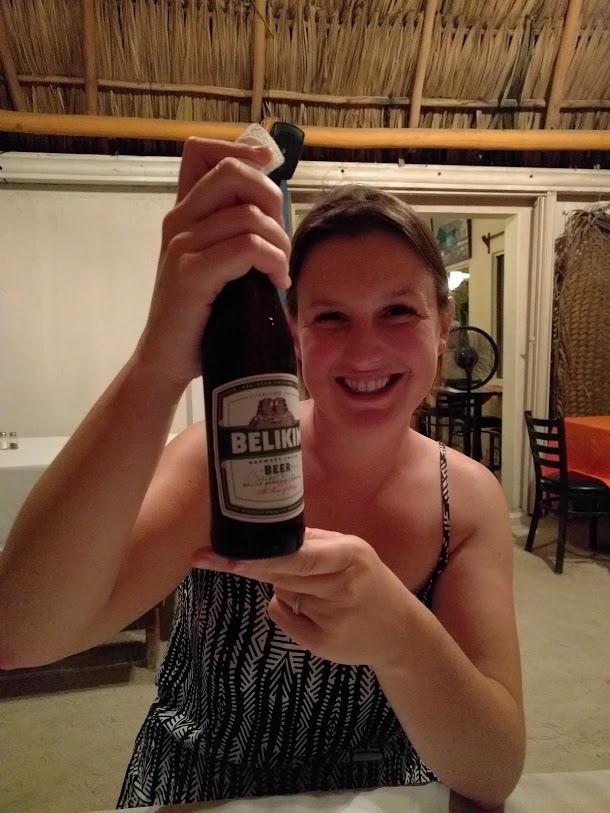 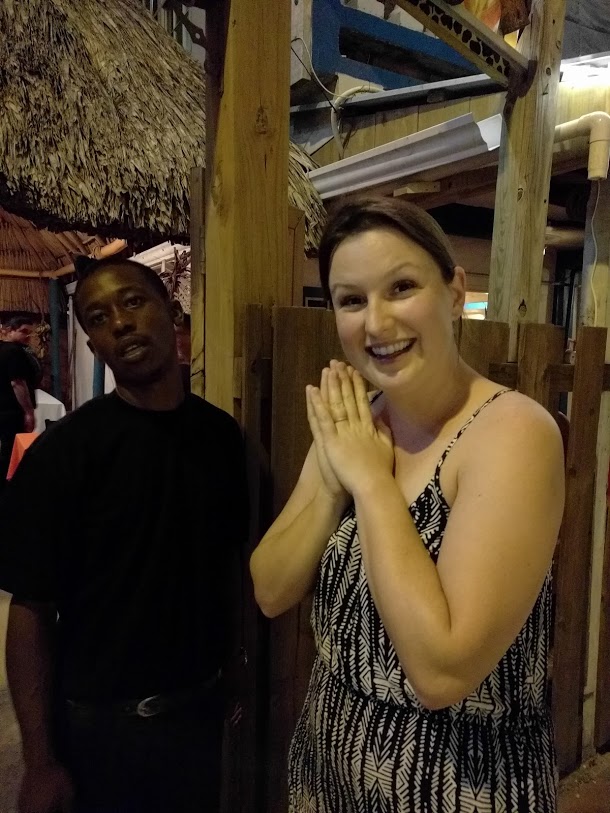 We decided to dive with the resort the second time around. Our guides were very friendly, but seemed to be a little too laid back regarding safety. The dives were great though – we were able to see plenty of wildlife after a short 5 minute boat ride. Oh, and Lindsay hugged a shark.

That evening, we had dinner at El Fogon again, which did not disappoint. Afterwards we found a beach bar that was actually showing the LSU vs. Arkansas game, which was surprising.  The bar had a very impressive thatched roof. We both enjoyed a couple of drinks before heading back to our bungalow at Ramon’s. One of the most enjoyable activities of the trip was the nightly bottle of wine by the beach after dinner.  It was just so relaxing and beautiful.

Our last full day in Belize. We did two morning dives, the second of which I had to guilt Lindsay into doing.  She was happy that I did after the fact though. We hadn’t really explored the island outside of the town of San Pedro, so after diving we rented a golf cart to see what the rest of the island was like. Lindsay picked out a great beach bar/restaurant just north of San Pedro, and the food was delicious. I was actually able to stream the Saints game over their WiFi. However, the game ended on a blocked extra point attempt being returned for two points, which was pretty frustrating. The good thing was that afterward I was able to realize how much more Sunday afternoons have to offer than NFL games.

Our golf cart tour continued after the Saints lost. We drove several miles north and discovered a far less populated area of the island. There were several mom-and-pop style resorts that we passed on the drive, so on the way back we stopped at one of them: a super heady vegan retreat. The resort was strictly all natural and did not use any “harmful” chemicals, including insecticides, which resulted in the place (and us) being attacked by hungry mosquitoes. Needless to say, we weren’t there long.

Lindsay found a good spot to watch the sunset, which was somewhat difficult because most of the island’s establishments face the Caribbean Sea.  The place was called “Truck Stop” and it was a collection of food truck-style eateries.  There was a dock leading to the waterfront on the back bay with a great view of the sunset.  The food at the truck stop also did not disappoint! 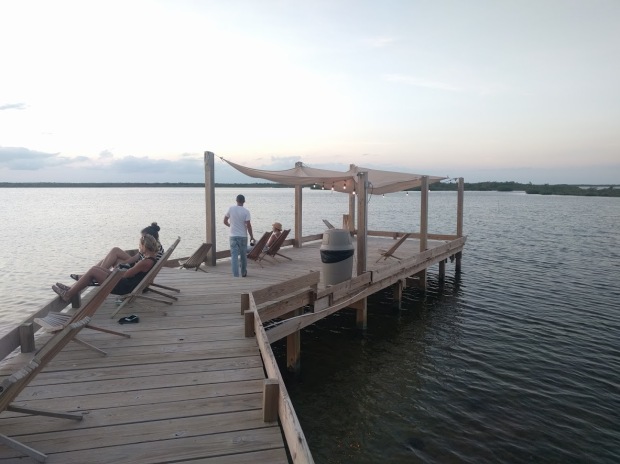 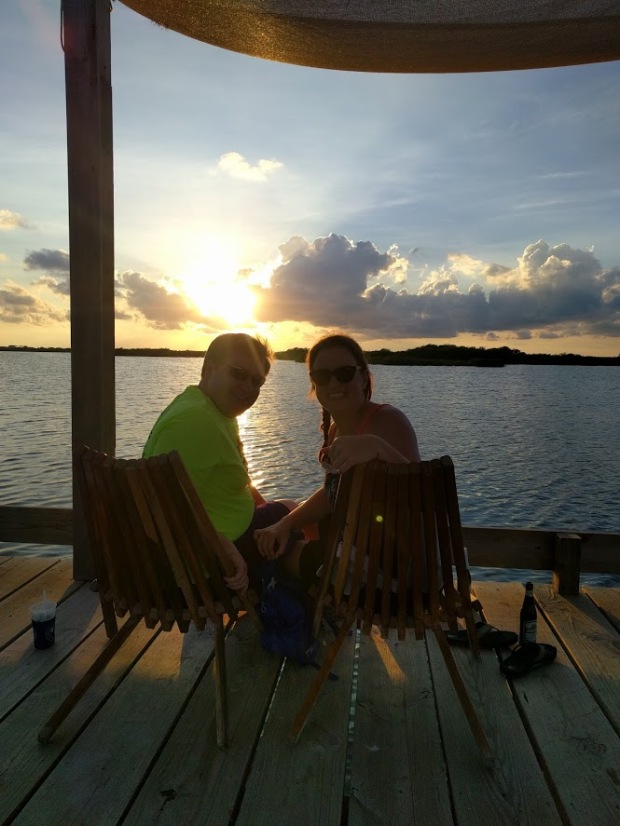 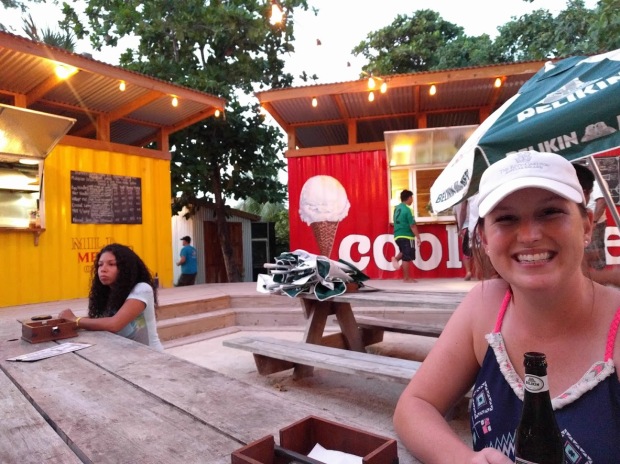 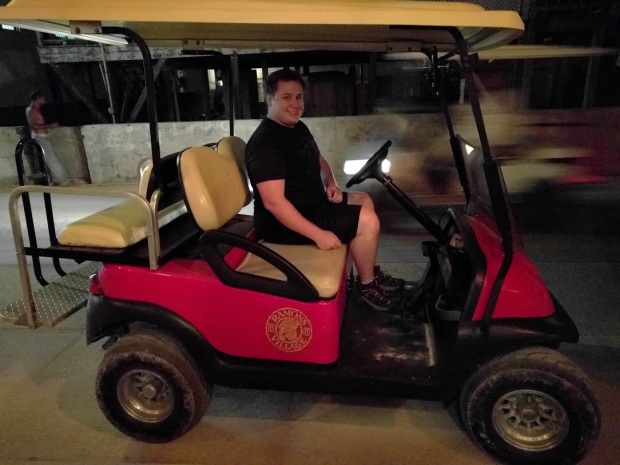 By the last day, we were both ready to return home despite having a great trip. We had one last delicious meal at the sandy-floored eatery Elvi’s Kitchen before returning to Ramon’s to pack our bags. Ramon’s Resort was very nice and we enjoyed staying there. Sometimes when we go on a beach getaway, we see places nearby that look a little nicer or better located than the place we chose to stay. This was not the case with Ramon’s. I would highly recommend Ramon’s to anyone visiting Ambergris Caye. 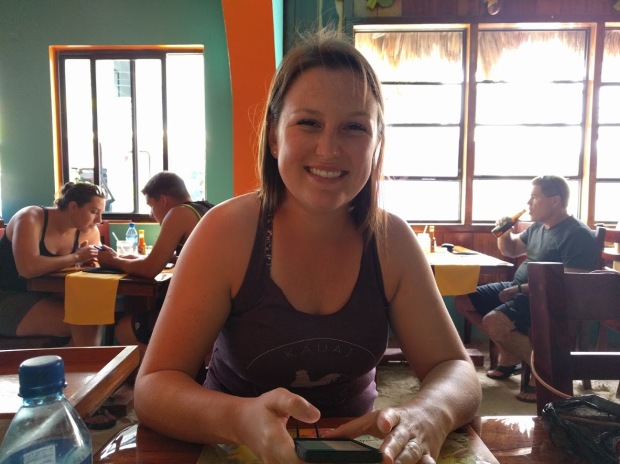 The last stop we made before going to the landing strip (otherwise known as the local airport) was an art store we’d visited a few days before. We both agreed after a few days that we couldn’t leave without a signature painting by a local artist. Our favorite was a painting of coffee farmers sorting beans for harvest, viewed from above.  We weren’t supposed to take pictures but I like to live on the edge. 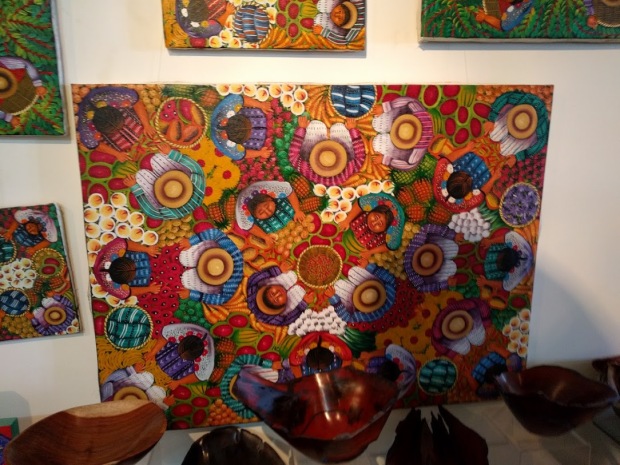 On the flight home, it was only the second time we boarded a plane via ground level stairs (the other being Key West).  I always find that interesting!